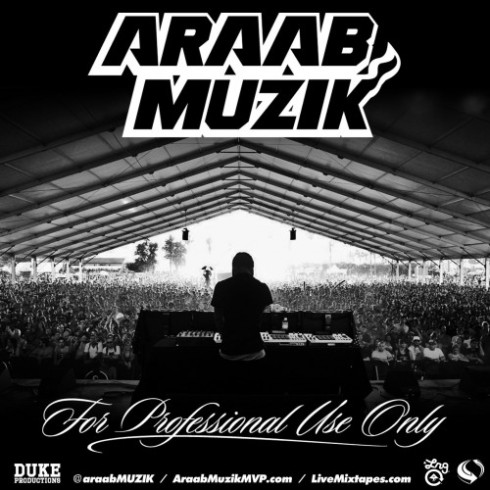 The first time I listened to Araab Muzik for any extended amount of time was at the concert that is featured on the album artwork of the For Professional Use Only mix tape. It was a sweltering late afternoon set at Coachella 2012. Despite the heat and dehydration, I was captivated by what Araab Muzik was able to create during his live show. Falling somewhere between the worlds of hip hop and dub step, Araab Muzik has deservedly been called the MVP of the MPC. The MPC or Music Production Center is the electronic tool Araab Muzik uses to create his intricate rhythmic soundscapes both in the studio and live. Usually when I see an artists performing his style of music live there are some laptops and maybe a turnable or two. I’m pretty sure when I saw Grammy Award Winner Skrillex at Coachella 2011, he just pressed play in iTunes and then proceeded to jump around for 45 minutes. I actually enjoy his music but the live show was a bit of a joke. And thats where Araab Muzik is able to really separate himself as an artist in a digital medium. His total mastery of this very 21st century instrument is impressive to hear and staggering to see:

For Professional Use Only is a showcase of Araab Muzik’s abilities as both a composer and MPC virtuoso. The album rarely relents, unleashing a constant stream of intricate beats for 67 minutes. Its an enjoyable, albeit lengthy ride through Araab Muzik’s mind. While a few of the albums 20 tracks stand out, most are easily enjoyed and then easily forgotten. While exciting to hear live, I find that I grew bored with the endless torrent of admittedly awesome beats. I think Araab Muzik has vision and ability to become the greatest hip hop producer in the world but he desperately needs to find a trusted collaborating partner. As an instrumental artist, his muzik seems to be missing a key puzzle piece. Though he has produced for a handful of rap artists in a limited capacity, I’d love to see him breakout with an entire album produced for a single rapper.

Certain tracks really can hold their own like “Turn Tha Tide” and “This For The Ones Who Care”, but these are tracks that lean much further toward the world of dubstep than rap. These tracks are also heavy enough and developed enough to entirely stand up on their own. Other beats like “Street Knocks” and “I Can Show You” are just begging for a rap verse or two.

For Professional Use Only is an inspiring direction for hip hop and electronic music production but with out collaborating artists to support the beatcraft, it just runs on too long to warrant many repeat listens. I’ve gone start to finish a handful of times and there are a couple tracks I’ll keep in circulation but the rest will probably be soon forgotten. I will continue to keep a close eye on Araab Muzik’s career development and jump on any opportunity I get to see him live. I recommend you do the same.

Top Tracks: “Turn Tha Tide”, “Runaway”, “This For The Ones Who Care”