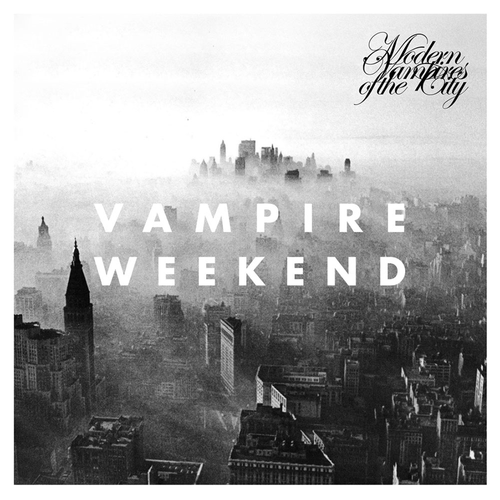 I remember a few months after Vampire Weekend released their self titled debut in 2008 a friend of mine said he saw them on MTV and immediately went to the mall to buy some Oxford shirts and top-siders. I can be a pretentious snob when it comes to music and this single interaction made me want to delete their album from iTunes and never look back. Their initial impact on popular culture seemed to be less focused on music and more on the lifestyle and fashion they seemed to flaunt. I was convinced they were a fad and I tried to ignore them for a while but this turned out to problematic because Vampire Weekend is a damn good album. Contra is just as good as its predecessor and that’s a rare for feat a sophomore album. I loved how they were able to grow in their sound without completely reinventing it. I wasn’t sure where they would go next but I was excited to hear their next chapter. I didn’t know it at first, but after about a dozen listens I’ve realized Modern Vampires of the City is more than just the best album of the year (so far), its an instant classic.

Success in the world of rock & roll has always been dangerous. A successful debut will usually lead to larger budgets for follow ups and the result is often bloated and over produced. Vampire Weekend has certainly expanded their arrangements with each album but rather than sounding like a total departure from their original style, Modern Vampires of the City sounds rich, developed and appropriately polished and unpolished in all the right places. With all kinds of new sounds in the mix, they reveal a true mastery for arrangement. This is their noisiest album to date but by knowing when to go loud and when to drop the excess, they are able to showcase their melodies more effectively than on any of their previous releases. On “Unbelievers” they build a rich layered wall of guitars, brass, and keys before dropping nearly everything out of the mix leaving the harmonies to stand on their own and the result is breathtaking. “Hannah Hunt” starts soft and slow focusing entirely on the vocals and gently adds warm textures before the song suddenly takes off and lead singer Ezra Koenig belts the chorus again this time backed by a wall of classic rock style instrumentation. Its one of many show stopping moments that populate the album.

Modern Vampires of the City’s primary theme is religion and spirituality as most of the songs either reference or entirely focus on the subject of religion. The exploration of this topic is honest, conflicted, and complex and I think anyone who was raised in a religious home but has since drifted from the church can relate to Koenig’s lyrics. Songs like “Unbeliever” convey a willful and direct rejection of organized religion but throughout the album there is a sense of longing to find meaning beyond our understanding of the world. Its a heavy topic but the band handles it with maturity, grace, and candor and while it gives the album some philosophical substance it doesn’t weigh it down either. Modern Vampires of the City is actually an incredibly fun album. Tracks like “Diane Young” and “Ya Hey” are sing-a-long summer anthems that are best enjoyed at full volume while driving with the windows down. Vampire Weekend’s ability to produce fun, joyous pop anthems that feature lyrical depth and complexity is a remarkable quality of this album. Hooks and melodies have always been one of Vampire Weekend’s strengths but they have truly perfected their craft on Modern Vampires of the City.

This year Vampire Weekend played the coveted Main Stage sunset time slot on the final day of Coachella. They began playing “Ya Hey” as soon as the sun had set and I remember when Ezra Koenig began the spoken word interlude about being on the festival grounds as the sun is going down and I genuinely thought it was merely an eccentric non sequitur. Upon hearing this interlude on the album I was overwhelmed by the realization that what I had witnessed was simply a perfect moment of music where everything came together. Modern Vampires of the City is a rare album. Flawlessly balanced, this album is entertaining and thoughtful, rowdy and refined, anthemic and intimate. Vampire Weekend has come of age in a truly spectacular fashion and their timing could not have been better.